Adolescence is a critical stage of self-definition. The significant changes in personality, together with the physical and psychological transformations characteristic of the period, weaken self-esteem.

The peer group (peers, friends, romantic partners, etc.) can be a means of remedying this problem insofar as it provides the adolescent with security. For example, a study we conducted with more than 600 adolescents aged 14 to 18 showed that they tend to have less confidence in their own judgements and seek external approval more by joining a group.

Adolescence thus marks a shift in the centre of gravity of daily life: whereas the child is primarily confined to the family circle, the adolescent seeks to distance himself from his parents and adopt the norms of a peer group. By confronting their peers in this way, they build their social identity.

In the past, teenagers used to meet in public places – cinemas, cafés, village squares – or in the countryside. Today, other spaces for dialogue are opening up to them on the web, especially as they are equipped with technology at an increasingly early age: from the age of 11, 87% of young people own a smartphone. The peak in smartphone ownership occurs at the end of primary school, with 5% owning a smartphone at the age of 9, compared with 40% at the age of 10.

According to the Ipsos survey conducted in 2021 among 1,000 young French people aged 15 to 25, YouTube is the social network most consulted by young people: nearly 9 out of 10 young people go there at least once a week and ¾ of them go there every day or almost every day. According to another recent study, conducted by Defy Media among 1,500 young people aged 13 to 20, 66% of them use YouTube for training, particularly with tutorials, 51% for entertainment and 24% to find shopping recommendations and discover new products.

Gender is a key variable in understanding the different uses of social networks by young people. For example, boys visit YouTube more regularly (81%) than girls (71%), who prefer Instagram (68%, +14 points) and Facebook (64%, +13 points).

Today, short video platforms are on the rise, to the point of overtaking the giant YouTube. According to the latest report from app analytics company App Annie, TikTok is now ahead of YouTube in average monthly time per user in the US and UK, with an average viewing time of almost 26 hours per month, compared to less than 16 hours for YouTube. Nevertheless, globally, YouTube retains the top spot based on total user time, and TikTok is in sixth place, having not made the top 10 in 2020. 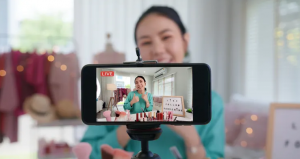 By watching and sharing videos of others on YouTube, adolescents position themselves in relation to them. Virtual sociability is experienced as an extension of real sociability, and those with highly developed offline sociability also have significant online sociable activity.

YouTube, like other social networks, provides the teenager with the opportunity to sculpt the desired impression, with the goal of “looking cool” and receiving peer approval. Thousands of young people post videos in which they express themselves on camera, very often from the domestic environment of their bedroom. Being at home is no longer synonymous with isolation, on the contrary.

Many sociologists have shown that the work of identity construction is part of the game with space and objects: the adolescent’s room becomes an extension of himself. Young people use YouTube as a tool for “identity bricolage”, if we take up Kaufmann’s words. They experiment with new presentations of themselves, creating a multitude of communities of belonging, around various themes, whether manga, video games, beauty or fashion, but all of which express a quest for the self.

What is most important is the sharing of experiences, marked by stages and/or questioning, for example a break-up with a lover, moral harassment or the announcement of a coming-out… But beyond consuming videos, teenagers are also co-producers of online content and information (“User Generated Content, UGC): they create their own films and share them with the community via digital social networks.

Faced with the development of new information and communication technologies, they have developed special skills. Some even go so far as to create their own company, like Squeezie who, at 22, launched his YouTube channel in 2011 and his clothing brand Yoki in 2020 in his image.

Today, teenagers are demanding user-generated video: 8 out of 10 teenagers prefer ads that show real people in everyday life. In this YouTube sociability, star figures emerge who become role models for teenagers looking for advice.
Young girls identify with fashion bloggers, such as Enjoy Phoenix, who has 3.7 million subscribers on YouTube, on subjects such as fashion, beauty, cooking, etc. In her videos, she goes beyond “lifestyle” advice to recount her painful personal experience, linked to bullying in high school, and the actions to take to deal with it. She thus becomes a sort of big sister – a role she claims -, a virtual best friend, even a “life coach”. Many other youtubers are breaking records and have millions of subscribers.

In France, Squeezie, Cyprien, Norman, Natoo, Mcfly & Carlito, Le monde à l’envers… All these youtubers use the same language as teenagers, expressing their emotions, their impressions, their experiences through mini-videos, and teenagers feel that they are being heard by making comments.

YouTube can be a danger in terms of inciting consumption, as companies will try to involve teenagers directly or indirectly (ideas, suggestions, communication, etc.) in the creative process of the offer. Moreover, it is important to keep in mind the essential basics of media education and critical thinking reflexes when browsing through the video proposals in order to avoid the fake news traps that could arise. Nevertheless, it is a field that offers interesting tools to help young people express themselves and individualise. Hence the need for a better understanding of these uses in order to better support and supervise them.