Your child is about to learn to read… Syllabic, global or mixed method? Which reading method is best suited to your child? We take a look at each of them, with their advantages and disadvantages.

Learning to read is a crucial step in the life of a child, but also of the parents. There is really no age for it. However, even if it is possible to introduce a baby to reading from six months of age, the learning process generally begins around the age of five. Whatever the age, the question remains the same: which method to use? It is true that between the more or less distant memories of school, the technique used by the teachers, the government departments and the child’s desires, it is easy to get lost. Here is an inventory of the different methods that exist, with their advantages and disadvantages, in order to better understand these different approaches and find the one that best suits your child. 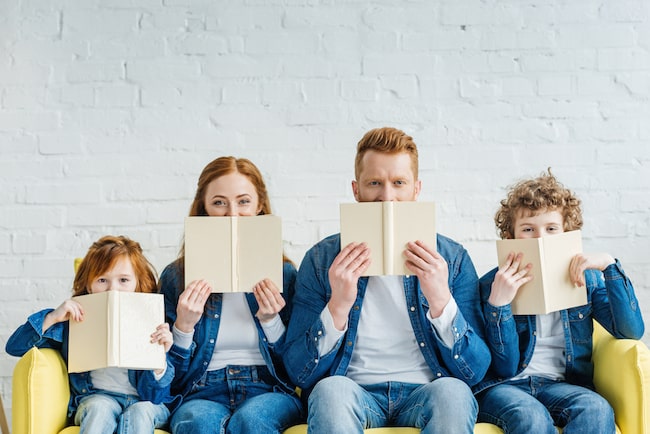 The syllabic method of learning to read

Dating back to the 19th century, this is the oldest method of reading. The child first learns the alphabet. Then they form syllables. This is the famous “b-a ba”. He will associate sounds (phonemes) and letters (graphemes). To learn to read, the child therefore combines sounds by breaking words into syllables. This reading method is progressive and is done in several stages. The pupil first looks at simple sounds, then at compound sounds and finally at words.

This method has many advantages. It allows children to learn to read at an early age. Children will be able to recognise their first syllables by the age of four. They can become very independent in their reading, since they have all the tools to decipher even the most complex words. Finally, it does not penalise children with a small vocabulary. This method is also being promoted by the Minister of Education, who wants to make it a national learning method. In an interview with Café Pédagogique, he said, “The idea is not to homogenise practices but to create a common reference”.

Nevertheless, this method takes time, and it takes about two to three years for pupils to read fluently.

The global method for learning to read

The global method for learning to read starts with a sentence as a whole. It was popularised by the Belgian neurologist Olivier Delcroy at the beginning of the 20th century. The child learns to read, not by looking at syllables, but by recognising words. It is therefore a visual learning process. The words are photographed. The aim is to get the children to recognise simple words from their daily lives or from their occupations and interests. The child reads the sentences and then analyses them. The detection of syllables is done in a second phase. This learning method is quite instinctive and does not use phonetics.

Thanks to this method, reading can be quick and early. It gives children a taste for reading very quickly. Some words are easily read, even if the child does not know all the sounds. For example, they can identify words with complex syllables, such as “house”, very quickly. Furthermore, as the global method does not necessarily use phonetics, it helps deaf children to learn to read.

Nevertheless, the child’s autonomy is limited. It will take time before they can decipher unknown words. If they come across a new word, they do not have the tools to decipher it. Sometimes they replace words with others, because they cannot see the difference. Also, if they photograph a word incorrectly, they will not be able to spell it well. The negative point of this technique is also the need to learn a lot of things by heart, which can block some children. This method is nowadays almost no longer used. In 2018, the Minister of Education Jean-Michel Blanquer declared that he wanted to abandon this learning method.

The mixed method for learning to read

As the name suggests, this method is a mixture of the two previous ones. It uses the global and syllabic methods. In the first stage, children learn to recognise associations of letters to form syllables and then words. At the same time, before they have all the tools in hand, they are asked to learn lists of words by heart. These are called “tool words”, such as adverbs or phrases.

This method is often the most popular with teachers, as it combines the best of both methods. However, having to learn word lists by heart can be frustrating for some children.

The Montessori method for learning to read

The Montessori school obviously has its own way of introducing children to reading. It is rather similar to the syllabic method. But in addition to the classical syllabic method, it associates a meaning to the words. It is a phonemic method, where the child learns to write before he or she can read. The practice of writing is done in several stages. First, the children learn to trace the letters. Teachers use “rough letters” which simplify the recognition of sounds and symbols. Gradually, the child will be able to recognise words. The Montessori method uses a mobile alphabet, which allows the child to compose sounds and words. This way of learning is quite individual and allows the pupil to progress at his own pace. After these first steps, the child should be able to read naturally. The aim of this method is to put the child in a position to succeed.

The Montessori method therefore allows the child to progress at his or her own pace, but it can be difficult to implement this system in conventional schools.